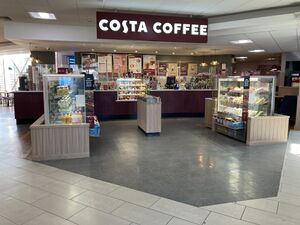 It feels like there's not a building in Europe which doesn't serve Costa, usually in several places at once. This is certainly the case on the motorways.

The brand started in London in 1971, and by the early 2000s Costa Coffee and its slogan at the time "Italian about coffee" was becoming a familiar sight in most town centres and shopping centres. It had been specially developed to take advantage of the growing demand for takeaway coffee.

By 2018, Costa had become the UK's biggest coffee shop chain and some shareholders were calling for it to be separated from the Whitbread Group. They sold it to Coca Cola for £3.9 billion.

The prices charged at Costa are set by the franchisee, and on the motorway these tend to be heavily inflated. The fact people continue to pay may explain why so many Costas have opened up near the motorways.

Roadchef were the first operator to introduce Costa to their motorway services. They approached Costa with a proposal in 1999, and opened the first one at Stafford in April 2000. A nationwide investment programme then saw Costa replace Cafe Continental at all Roadchefs.

Granada partnered with Caffè Ritazza and hoped to see the same success. Their successors, Moto ditched Caffè Ritazza in 2009, in favour of Costa. Welcome Break, who had been keen to be different, eventually adopted Starbucks and were keen to stress that this set them apart. Until Starbucks on the Go machines became widely available, Welcome Break offered Costa Express too.

Over the years the availability of Costa at service stations has spread from being tucked away in an old unit or a stand next to the restaurant to being served outside the entrance, in the restaurant, from a portable stand, in the shop and in the petrol station - usually all at the same time.

The lounges have become increasingly stylish as the image of service stations and of Costa has changed. Many services now rely on Costa's menu only to meet their obligation to provide food 24 hours a day.

In July 2016, Roadchef opened their first Costa drive thru, in a similar style to Welcome Break's Starbucks drive thrus. Drive thru Costas can now be found at most Moto and Roadchef services.

Roadchef were the first operator to register a subsidiary company 'Roadchef Costa Coffee', which sneakily allowed them to advertise their relationship with Costa while technically not breaching the ban on advertising. Moto later decided to go one better, changing their headerboard to 'Costa M&S' or other variants.

Many former Esso On the Run stores used to include a Costa café, where you could pay for your fuel at the same time. These all closed by 2015 and many have been replaced by Subway and Greggs at Euro Garages sites.

Through its relationship with Moto, Costa has become a popular choice to replace former Little Chef restaurants. However, Euro Garages are currently the fastest-growing operator in the industry, and as Euro Garages use Starbucks, Costa has begun to take a back seat in this field. 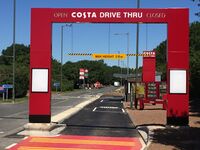 A Costa Drive Thru at Strensham

Unlike the Starbucks sites, all of these Costa drive thrus don't offer any seating. It is being included in many new service station proposals. 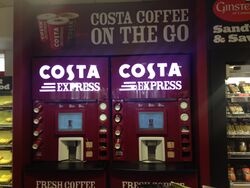 A pair of Costa Express machines.

In March 2011 Whitbread, the then-owner of the Costa Coffee brand, purchased Coffee Nation with the intention of re-branding it as Costa Express.

Coffee Nation was a brand widely seen across motorway service areas providing coffee machines within petrol forecourts and WHSmith outlets. They are also seen at most A-road services.

Costa Express machines now offer five varieties of hot drinks and are the largest coffee machine provider for forecourts in the UK. Their widespread use allows a large number of petrol stations in the UK to be classed as a full service station by providing the key requirement of serving hot drinks with very low running costs.

During mid 2018, Welcome Break started to phase out the use of Costa Express at their sites in favour of Starbucks on the Go machines.

Costa stores can be found at many motorway service stations. They are: [view on a map -  Download KMLrefine search]

Moto have a few Costa units in some of their forecourts. They are:

Costa Drive Thru units can now be found at many services. They are: [view on a map -  Download KMLrefine search]

Costa stores can also be found at the following services in Ireland:

Costa has been removed from the following official service areas: