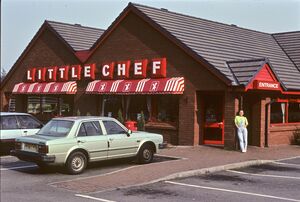 Little Chef was once the biggest of all Britain's roadside names. For almost 60 years it catered for families, businessmen and nearby restaurants through its large number of roadside diners and service areas.

It was the golden child of its owners Trusthouse Forte, which was then seized upon by Granada who grew it to become a 439-branch mega-brand, with branches every eight miles along major roads, and posters at every opportunity. What followed was a slow and painful decline, with 15 years of headlines about financial difficulties and mass closures as the chain was thrown between passionless owners who each had a completely different strategy.

Instead they spent January 2018 hastily removing all references to Little Chef from the few remaining restaurants, which then continued throughout 2018 as EG Diner before being totally refurbished to become fast food units. Several members of staff reported they were ultimately made redundant without acknowledging their long service of up to 45 years.

Little Chef have had a huge cultural impact, often owing to their negative public perception from the past. There was a whole episode of the popular soap opera Crossroads themed around Little Chef taking over the business. There is a long-standing joke that Little Chef's chain of restaurants pre-dates the British road network. This joke will last a lot longer than their restaurants.

As of February 2022, the Little Chef website is still advertising restaurants that closed four years ago, causing confusion. Somebody is continuing to pay the bills to keep both of its websites active every year.

The Little Chef brand is owned by Kout Food Group in Kuwait, following the liquidation of their subsidiary, which had been dedicated to monetising the Little Chef brand. Note that this did not necessarily mean they were seeking to open new restaurants, but that they may not have turned down an opportunity if one arose. It's not clear what the current owner's intentions are, beyond protecting their intellectual property.

Their subsidiary successfully defended the Little Chef trademark from another company who was hoping to use that name in July 2019. Meanwhile, the founders of a new restaurant chain, Brightside, have given Little Chef as their main inspiration. 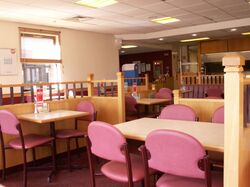 As detailed in its history, Little Chef experienced many different expansions, takeovers, and refurbishments, which meant that there was no single restaurant design. Even so, the customer experience was all about consistency, with each restaurant having long opening hours (almost always 7am to 10pm) and a waiting point and sales counter by the door, where there was often a very small shop. There would be a counter at the side, and toilets which were free even for non-paying customers. There would be a sign by the main road listing what was available.

Its early, rapid expansion was key to Little Chef's longevity – at times Forte wanted to grow it by 40 branches a year. Each branch had a unique unit number, and most were situated next to main roads, alongside a hotel (Travelodge/Little Chef Lodge) and a petrol station. A number of franchised brands were later added. Discounts would be provided for lodge guests and registered 'friends' of Little Chef.

For many, it was a name associated with family holidays, and branches sprung up on the way to Cornwall, The Lake District, and across Scotland. They also experimented with restaurants across Europe, in UK airports, shopping centres, and even on ferries. Several takeaway options were introduced, the most extensive being part of the Wonderfully British refurbishment.

Families were key to Little Chef's business model, and the growth of family roadtrips encouraged Little Chef to expand so rapidly. This created a somewhat hostile relationship with lorry drivers, as many popular trucker's cafés were taken over by Little Chef, who would then ban trucks.

This was partly for practical reasons – they had a policy of providing two seats for every parking space – but also for reasons of class, with Little Chef targetting businessmen on weekdays where no families were around. One branch at Leicester Forest East in the 1990s was reported to have a sign telling lorry drivers they weren't welcome, even though there was a lorry park right outside. 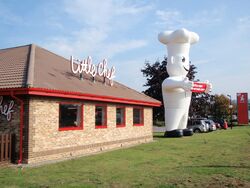 A takeaway menu promotion outside a branch refurbished in 2011.

While Little Chef changed its menu regularly, it maintained the same format with some established breakfasts, desserts, and a range of hot drinks. Hot drinks were later branded Lavazza and Miko. Until 2017, most restaurants held an alcohol licence.

Little Chef's breakfast menu featured three particularly well-known items: The Olympic Breakfast, The Early Starter and The Chef's Grill. The first one was introduced in 1994 and became a firm favourite, lasting through to the end, and withstanding a controversy over its name during the London Olympics. Their desserts included the Jubilee Pancake which contained a filling of cherries and a tangy cherry-flavoured sauce, accompanied by vanilla ice cream. A Scottish Breakfast was sold in Scotland.

As a chain aimed at families, Little Chef were particularly well-known for their facilities and offers aimed at children. A smaller children's menu was made available (which was branded 'Dennis the Menace' for a while), while high chairs and free baby food were provided.

The familiarity of the menu was one of the reasons Little Chef was so successful. Little Chef became so focused on this that they provided their chefs with strict instructions on how the food should be presented. This changed with the menus designed by Heston Blumenthal, as he put the emphasis on the quality of the meal and how it was served.

A sample of some of the more recent menus are included below. These don't represent every menu change.

A wider variety of food was available for a while at places designated Little Chef Choices, and a lesser menu was available at Little Chef Express. Hot drinks were served variously under the names Coffee Stop, Café Nescafé, Coffee Tempo! and Lavazza.

Until the final years, all branches would provide complimentary newspapers to guests.

Little Chef restaurants were styled to look like classic diners, with low-hanging lampshades, and individual chairs and tables. There was usually a red carpet on the floor, and curtains over the windows. The restaurants designed by Heston Blumenthal were the very opposite of this, with their shiny floors, and chrome finishes.

From the outside, restaurants usually featured bright red-and-white awnings. This was toned down in the early 1990s, and restaurants became a little more subtle – partly due to changes in what was considered appropriate, and partly because this was when investment in signage and fittings began to stop. Starting in 2009, an investment in refurbishment tried to bring that retro look back, but only some restaurants were updated.

The car park outside would now be considered a standard feature of any out-of-town restaurant, but this was key to Little Chef's success: they were the first major chain where customers could plan a visit to any branch without having to worry about whether there would be convenient car parking available.

Little Chef's logo was nicknamed 'Fat Charlie'. It was revised and shrunk roughly every 10 years. It had been suggested that his portly figure was putting off customers, but attempts to slim him down proved unpopular. In 2009, a permanent revision was made, replacing his neckerchief with a proper chef's jacket.

Fat Charlie was made available in many forms of merchandise.

In 2002, the Thame restaurant had the typeface on its logo changed to use a more friendly, cursive font, created by Keanebrands. The new branding wasn't rolled out until 2011, where the Wonderfully British refurbishment included a cursive font. The buildings were painted bright red as part of this. The website was updated with each styling.

Buildings initially had a flat roof with large windows. They then moved towards a pitched roof (with fake roofs being retrospectively added), with red-brick walls, and finally a grey-pan tiled roof with lightly-coloured bricks. During the blue phase, buildings were painted almost entirely blue. Most of these were changed back.

Their smallest restaurant was at Eye Green, which was one of two restaurants that were built into Travelodge hotels to save space. Other distinctive branches included Wansford and Markham Moor.

One signature feature of a Little Chef was the tall, thin lighting columns in the car parks, dubbed 'mini milks' after the ice cream. These still survive in many places across the country.

Little Chef came to be known for its abandoned branches.

When Little Chef first started, the only food available along major roads was aimed at lorry drivers. Families and businessmen would need to head into a town or village, and hope that something would be available there. Little Chef was the first chain to change this, and with the number of cars on the road increasing, so did their branch numbers.

They were quickly able to use their large size to dominate the industry, taking over any other promising-looking diner chains. Each advertising campaign offered returns way ahead of what they did for a smaller chain, who'd have fewer branches to promote.

Once it hit its peak, Little Chef suffered at the brutal end of retail, as it was tossed between disinterested owners who were determined to make as much from it while putting as little in to it as possible.

The chain has been owned by two major motorway operators. As consumers' demand began to change, those companies prioritised their own catering, leaving Little Chef to weather the storm on its own where it struggled to adapt to the new world of coffee, salads and takeaways. As it entered terminal decline, the biggest challenges were managing costs, and dealing with increasingly disappointed suppliers. Several well-intentioned efforts to save Little Chef weren't enough to prevent the number of branches falling in great chunks until there were none left at all.

Restaurants have gone on to become coffee shops, fast food joints, independent diners, and the occasional adult shop; but some will be cleared to make way for something completely different.

In the 1980s, Little Chef ran a series of TV commercials, focusing on the variety of the menu. These adverts then began to direct themselves at families, promoting offers such as two meals for £4.99 and free meals for children. In the 2010s, offers and competitions began to move online.

Prior to this, a series of promotional postcards were produced, showing the Magnificent Big 7 Burger and the slogan "it's summer, it's fun, it's Little Chef". Badges were also available showing Fat Charlie in various forms.

Like many brands, Little Chef sold many special atlases with their branches highlighted over the years, which have been made widely available.

Little Chef's most famous souvenir were the red lollipops which were provided to children (and like-minded adults) after every meal. A special, yellow edition was briefly produced. Other products would be available in the retail shop, and free road atlases were sometimes thrown in with meals.

Slogans have included "you can trust Little Chef", "unsurpassable", "turn left; we get it right", "for people going places", "the better place to stop", "a Little Chef goes a long way" and "Little Chef; big choice".

These days, a lot of Little Chef memorabilia can be purchased second-hand online. Due to their new owners' desire to convert the estate quickly, even furniture would turn up on online auction sites.


Views expressed in these comments are those of the individual contributor. User accounts are managed by CommentBox.io.
We ask the companies named to check here regularly but we can't force them to do so.