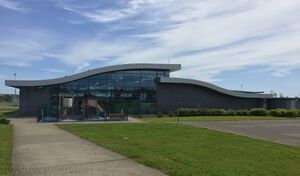 Online (
Two sites located between junctions, with no public connection between them
)

The first service area north of Dublin is an online one, managed by the SuperStop Consortium.

All facilities except the fuel payment, a toilet and a shower close at 23:00.

Parking is free for all vehicles, up to a maximum of 4 hours for cars and 12 hours for other vehicles. 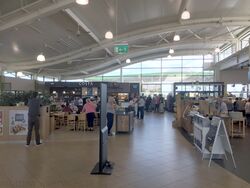 Lusk was known as 'Round Towers services'. During planning, it was called 'M1 South services', referring to its northern partner.

In terms of road layout, Lusk is designed like many 1990s British service areas, such as Tibshelf. It could effectively be its own dumbbell interchange. Externally, the design is like newer services, with relatively low land prices affording a very spacious design. Although the two buildings are the same, the car park arrangement is different.

The building is a standard Applegreen layout, but with an additional toilet block accessible from outside, for use when the main building is closed. The parking areas were expanded in December 2020, as this was designated a stacking point as part of Dublin's Brexit preparations.

In 2017, the service station sold fuel for 88.5 cent a litre as part of a promotion celebrating that it had recently sold a winning €88.5m lottery ticket. The discount was stopped by the National Roads Authority as the queues were disrupting the motorway.