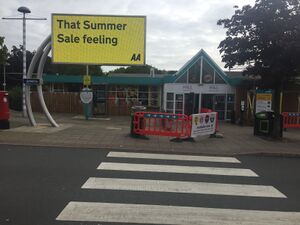 47 more photos in the gallery

Tamworth is part of a business park, strategically located along the M42 where it meets the busy A5. Traffic lights on the roundabout can make getting out difficult.

First 2 hours free for all vehicles, after which cars must pay £15 and HGVs, caravans and motorhomes £30. HGVs can pay £32 to include a £10 food voucher.

Prices are paid using PayByPhone. The location code is 2466. 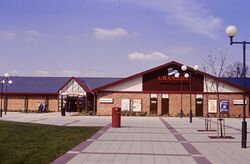 47 more photos in the gallery

There are 257 car parking spaces together with 18 spaces for coaches and 34 HGV spaces within the site boundary. A 1994 study calculated that the service area had a turn-in rate of just 5-6%.

The service area's access road formed part of a through route, linking a country lane (Green Lane) to the dual carriageway to the M42 (also called Green Lane). It is not a public route and has since been closed off.

Under the original plans for the HS2 eastern rail link, Tamworth services would have been demolished. A revised plan has the tracks running in a tunnel, allowing the service area to remain. 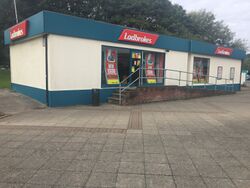 Between 1995 and 1998 there was a Rock Island Diner here. It was initially provided in a separate building, but it was moved indoors. Insiders claimed this was because it was failing, but Granada insisted the move was to double its capacity. It had glossy chrome and red plastic fittings and 1950s posters and music are no longer to be found.

The inside restaurant then became Little Chef, while the outdoor building became Ladbrokes.

The M&S Simply Food store opened here on 2 March 2006 and was opened by the then-manager of Tamworth FC Mark Cooper.

The original plan for the M42 had a service area nearer J11 - probably at Austrey Meadows. Building at J10 was specifically ruled out because it would cause traffic issues.

By the time the motorway was mostly complete in 1986, the Department of Transport were trying a number of new methods to encourage interest from developers. They decided to experiment with a new system where instead of specifying the location, they would invite any developer to propose a service station "on the northern section of the M42". The first developer to come up with a proposal that satisfied both the DoT and the local authority's planning department would win the contract.

Esso won the contract in 1987 with their plan for Tamworth services, which would be built in the new industrial estate. Esso partnered with Granada to build and operate the main building, and later sold their petrol station to Euro Garages.

In late 2020, Euro Garages rebranded the forecourt to their Sainsbury's On the go brand and permanently closed the Subway store inside.