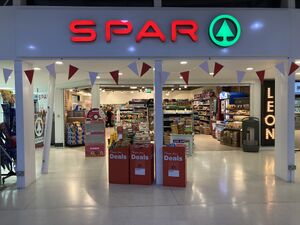 SPAR is a convenience store franchise which became one of Roadchef's partners in June 2015. Large stores are being built as part of significant refurbishments to their busiest service areas. Roadchef are trialling a click & collect service for their SPAR branches.

These Roadchef stores include products from their own-brand Garden Square Deli, an in-store bakery and some locally sourced products.

SPAR's return to motorway services actually started with Rivington, thanks to an existing deal with Euro Garages. Euro Garages had used SPAR in most of their petrol stations, but this may change now that they own Asda.

The SPAR franchise is a common sight across Europe, including on Irish motorways, where stores are operated by BWG Foods. The UK stands out for being one of the countries which isn't so familiar with SPAR, or its spin-off brands.

Roadchef had previously trialled an arrangement with SPAR, where it was introduced to their forecourts in the early 2000s, along with Costa and Delice de France. This concept wasn't deemed to be successful and was withdrawn.

SPAR can be found at a number of Roadchef and EG Group service areas. These are: [view on a map -  Download KMLrefine search]

SPAR branded shops can also be found at the following motorway forecourts:

SPAR has been removed from the following signposted service areas: