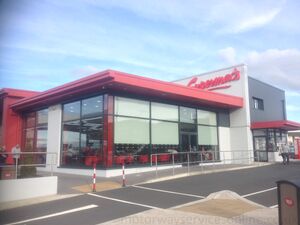 Supermac's is a fast food chain available in towns across Ireland.

Their larger restaurants include units branded as Papa John's Pizza (which Supermac's own the rights to in Ireland), SuperSubs and Mini Macs.

Keen to get in on the development of the motorway network, Supermac's privately developed The Barack Obama Plaza. This was later followed by a sister site, Galway Plaza and two cancelled proposals.

In June 2017, Supermac's began a national advertising campaign which referred to the "Supermac's Plazas", a title which includes the Tipperary Town Plaza and the Mallow Plaza, two additional sites serving the N24 and N20 respectively. Until then each site had been marketed individually.

The new campaign described the plazas as "a new era in motorway services", confirming Supermac's intention to act like a UK service station operator.

In an August 2017 poster, they referred to themselves as "The Plaza Group", with an accompanying logo. Several more plazas have since been developed.

Supermac's can be found at the following official service areas: [view on a map -  Download KMLrefine search]

The Plaza Group operate several more sites, most of which aren't official motorway service areas, even if they look like one. These are: