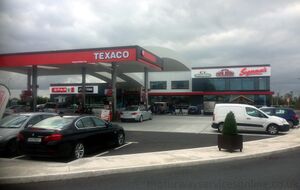 Following the success of the Barack Obama Plaza, Supermac's were hoping to build on its success and roll out a network of them. Galway was next to open. 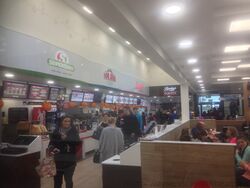 The Plaza opened on 12 February 2016. It was developed privately following delays to the National Road Authority's plans for public developments. Co. Galway is the spiritual home of Supermac's so it was an obvious place to target with a large development. TII are investigating building their own motorway service area west of here at Athenry.

Unlike most other Plaza Group sites, this restaurant is not a drive thru. The HGV filling station could almost be a separate development, being positioned much further down the service road.

In planning, Supermac's referred to the services as the Kiltullagh Plaza. Transport Infrastructure Ireland continue to call it Kiltullagh, despite the prominent Galway branding. In 2019 they even placed large signs on the M6 referring to a service area at Kiltullagh.

The Galway Plaza won 'Best Forecourt Facilities' at the 2019 Forecourt & Convenience Retailer Awards. In 2018 it won the same award, as well as 'Best Motorway Service Station'.

iRadio In The Afternoon was broadcast live from the plaza on 16 July 2021.