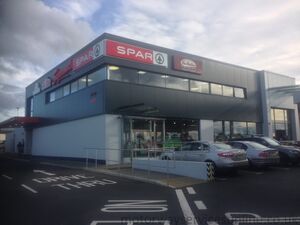 The service area at Moneygall is much better known by its stage name, Barack Obama Plaza. It consists of several Supermac's brands under the same roof.

The unusual choice of theme from a petrol station has made the Barack Obama Plaza famous around the world. In 2019 it won 'best motorway service station' at Ireland's Forecourt & Convenience Retailer Awards.

Parking is free for all vehicles for a maximum of two hours only. 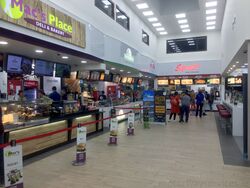 The plaza opened on 30 May 2014. It was developed privately following delays to the National Road Authority's plans for public developments.

The service area has an unusual design feature in that the car park isn't right next to the main entrance. It is a short walk down the road, almost as if the car park was forgotten about and added at the last moment. Only half of the 12-acre site is used by the restaurant, the rest has been reserved for possible future development.

The site is often wrongly referred to as being in Co. Offaly. There is a border with Offaly barely 500m on each side, but the land here is part of a small section of Tipperary which surges north to encompass the service area.

Trying to be a service area which puts something back, the services also provide information on nearby attractions and flights.

Another unusual and remarkable feature is the 1980s pop music played across the forecourt area. A car valeting service is available here too.

On 20 December 2015, the Coca-Cola's Christmas Truck Tour spent an evening at the services. In December 2019 it was the subject of the documentary 'Services Ahead', where RTÉ Radio One's Brenda Donohue spent 24 hours at the service area. A further edition was recorded in 2020.

Following the success of the Barack Obama Plaza, Supermac's went about proposing a number of new services with a very similar design, under the title Plaza Group. 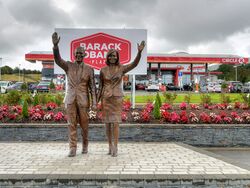 The reason for the service area's unusual name (by European standards) is that Barack Obama is descended from a family who once lived nearby. An exhibition explaining this and the history of Irish-US relations is presented on the second floor, tucked away from the hustle of the fast food outlets below. There are also pictures and cardboard cut-outs.

In 2016, Kevin O'Malley, American Ambassador to Ireland, unveiled a bust of Barack Obama which is displayed inside the main building. In August 2018, bronze statues of Barack and Michelle Obama were unveiled by the front of the site, for people to have their photos taken with. These were sculpted by Mark Rhodes.

Circle K and TII both refer to the service area by its Sunday name, 'Moneygall'.