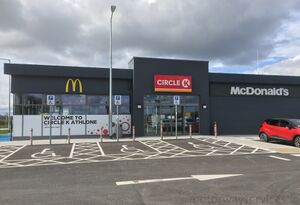 After more delays, another official service area has finally opened, this time serving the road to Galway.

As part of Ireland's new-found desire for new motorway services in 2007, a site was planned at Athlone. A new junction was built to accommodate it in 2015 but it was left fenced off.

Topaz won the contract to operate it as their offer scored 7% better than SuperStop's (Applegreen). SuperStop argued that this fell down to a difference in how the footpaths should be surfaced which hadn't been accounted for, and their objection prevented work from progressing any further

The amenity building has three entrances, serving the forecourt, car park and picnic area; it is effectively a carbon copy of Gorey. After clearing all the legal hurdles, it was set to open in June 2019, but this was pushed to September. It officially opened on 13 September 2019, with a ceremony attended by Gráinne Walsh.