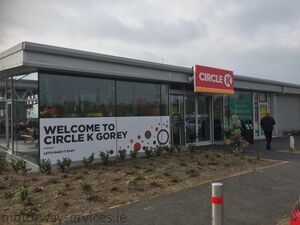 One of Ireland's newest motorway service areas has been around for ages. It was mothballed for four years while contractual arguments were sorted out, and was finally brought to life in 2019. Unusually for a modern service station, it has a busy restaurant area with little high street branding, though there is a small McDonald's. 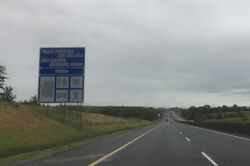 The site has been called Gorey North by some sources, but the road signs just say 'Gorey'.

As part of a new enthusiasm for building new motorway service areas which the Irish government discovered in 2007, as well as the project to upgrade the N11 to motorway, a service area was planned at Gorey. The plan initially received objections from local businesses but these were overruled in favour of a traffic assessment which concluded that the M11 needed one service area.

Work started in August 2013 and finished in 2015, making it a year behind schedule. Topaz won a contract to operate it. Their offer scored 7% better than SuperStop's. SuperStop argued that this fell down to a difference in how the footpaths should be surfaced which hadn't been accounted for, and their objection prevented the new building from opening.

Applegreen, who are part of SuperStop, claimed there wasn't enough traffic to warrant opening Gorey, which would take trade from a site they privately developed at Wicklow. Applegreen planned and opened Wicklow in the time it took to resolve disputes about Gorey.

In May 2017, it was announced the services would be opening later that year, however in November 2017, Topaz revealed that they still hadn't entered any formal agreements to open the site, hinting that the contract is no longer as attractive as they thought it would be. The site was ready to open during this time, but was fenced off and guarded by a 24-hour security patrol, costing over €400,000 in addition to the €10 million investment.

'Pay at pump' is available in the forecourt.