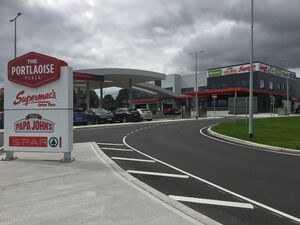 A brand new Supermac's Plaza has opened opposite Midway Food Court. This means it's right in the middle of the M7 and the second plaza to open on this motorway, after the original. 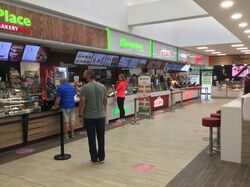 Being in the middle of the M7 between Dublin and Limerick, exit 17 has proven to be a popular place for development. This started with the Midway Food Court, which never officially qualified as a motorway service area, because it wasn't open 24 hours and initially it didn't sell fuel. The Portlaoise Plaza is not currently treated as one either; it's not entirely clear why, and Transport Infrastructure Ireland didn't give us an answer when we enquired. It may just be that it takes time.

In 2009, a landowner close to the junction was trying to gather interest from a developer wishing to build a motorway service area. In 2017 Supermac's confirmed they were in talks to build a Portlaoise Plaza here, similar to the popular one down the road. They purchased a 109-acre plot of land for €3.25 million, but later sold 76 acres to the council.

A planning application was formally lodged in March 2018 for a two-storey building with a food court, a drive thru and a forecourt. Several objections were raised by local businesses, arguing that the roundabout can't handle it, that the building design is poor and that it merely replicates the existing food court. Planning permission was granted, and a subsequent appeal from Applegreen claiming that two service stations on one roundabout would be confusing was overthrown.

Transport Infrastructure Ireland were also thought to have concerns, but they did not formally appeal. One especially interesting remark from them was: "The Council are requested to address the proliferation of such service areas at national road junctions in the County". TII have a vested interest in their own service areas, of which there are currently none on the M7.

The Portlaoise Plaza represents a €10m investment from Supermac's, creating 120 jobs. There is parking for 144 cars, 20 HGVs and 10 coaches. Work started on its construction in early 2020, with a scheduled opening of May 2020, but this was postponed due to the COVID-19 pandemic.

It opened on 31 July 2020. The publicity surrounding the opening was inevitably dominated by talk about COVID-19, with Supermac's founder Pat McDonagh saying he was "optimistic" about the new plaza despite "the mother and father of all situations". He also talked about the possibility of modifying the building to support hot desking, after praising Portlaoise town for its potential to become a "meeting place".

The run-up to the opening was also marred by fake internet rumours claiming the place was going to be called "Queen's County Plaza", which caused outrage across the country. Further difficulties were encountered the following week, when Co. Laois was placed into a COVID-19 lockdown. Restaurants had to become takeaway only and anybody living outside Laois was told not to stop when travelling through the county.

An additional entry and exit were later provided, leading to a new roundabout on the road to Cúil na Móna. This allows HGVs to avoid circulating back through the site, and allows direct access from the planned new industrial area.