The only motorway services at this end of the road network, this recently extended site is aimed at drivers heading towards North Wales and the Wirral (and, presumably, Chester).

Prices are paid using PayByPhone - more details or in the shop. The location code is 5267. 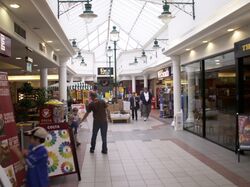 Chester services didn't open until 1998, but the idea dates back much longer than that.

Chester was originally planned in 1970, under the name Hapsford. It would have opened at the same time as services near M53 J5 (Eastham Rake) and M56 J8 (Agden). The plans were then scaled back as traffic flows in the region were expected to be low.

Rank and Fortes were encouraged to bid for Hapsford despite them already owning sites on the M6. The M56 opened with only a stub at the roundabout where the service area was meant to be.

In 1978 a gravel parking area for cars and lorries was opened, along with a small toilet block. This was known as Hapsford picnic area. In 1986 the Department of Transport confirmed that they still intended to upgrade Hapsford to a full motorway site.

In 1992, service area planning was deregulated. A development firm called Bushwing Plc proposed turning the site into a full motorway service area. It would have had a diamond-shaped amenity building. They included drawings of signs showing that the site would have been called 'Hapsford' and branded 'Bushwing', with a grey-on-green logo.

That plan was given permission, but Bushwing changed their mind. In 1995 they came back with two options: option 1 would be built in the north-west corner of the junction, accessed from traffic lights on the A5117. There was an additional picnic area with a take-away building, and a lodge behind the L-shaped amenity building. This was refused permission. They also put forward their second option, which was on the site of the existing picnic area, but on a much larger site with community woodland at the back. This would have had a separate drive thru building, a lodge and a C-shaped amenity building. The entrance would have led to a small atrium with exits for the hotel, restaurant, a burger bar/café, toilets and an arcade, plus three concessions. This was approved.

Meanwhile, an applicant called Adamstan applied to build a rival site either side of the M56 at Hare's Lane. This was refused.

In 1995, Shell put forward the plan for Chester services as it was eventually built, after an appeal. The amenity building was going to be closer to the forecourt, but was moved to leave space for the lodge. For some reason, the area around the pylon (originally supposed to be car parking) was turned into what appears to be caravan bays, which are now closed off and abandoned.

The biggest difficulty with the site was planning around the overhead power cables, and large pylon.

Shell chose to work with Roadchef to build the service area. Roadchef were originally intending to call the development Hapsford services, but at the last moment this was changed to Chester.

The building provided at Chester was large, but simple. On the right was Wimpy, then the shop. On the left was the seating area, with the restaurant servery behind it. The corridor then continued into the toilets area with a game arcade, tourist information centre and offices. The opening of a Costa counter in the seating area made the corridor much more obvious.

There had been several plans to change this, but no progress was made until 2013. This was when a new entrance was provided, and the pathway was changed to snake through the seating area. The relatively new Hot Food Co was replaced by the motorway network's second Fresh Food Café counter. From this point Chester would be treated as one of Roadchef's premier sites.

During 2016, the front of the amenity building was extended. This created a new Chozen Noodle outlet, Spar store, extended seating area and followed refurbishment of the remaining facilities.

A Pasty Presto kiosk was here for a short while and was the most northerly in the UK. Roadchef also opened their first Pret a Manger here in December 2017. The Pret a Manger store eventually closed in early 2020.