A service area on the new section of the A1(M) motorway, bridging a large gap between services. It claims to be the greenest motorway service area in Britain. 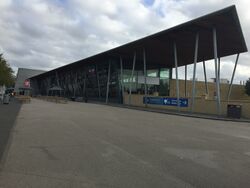 Wetherby dates back to 1993, when several proposals for a new service area on the proposed A1(M) were put forward. One came from Welcome Break, which was taken forward by Granada when they took over.

The "Kirk Deighton Plan", as Wetherby was known, was rejected, but Granada and Macgay Ltd appealed the decision. In 1997 a public inquiry considered Kirk Deighton and Kirby Hill, and in 1999 it concluded that Kirby Hill should be built. That decision was quashed by the High Court in 2002, and a further inquiry looked at these two plus three more services.

This time the Secretary of State concluded that of all the proposals, Kirk Deighton was in the most suitable location, and that it would do the least damage. This was primarily because Wetherby was broadly half way between Ferrybridge and Leeming Bar.

Outline planning permission was awarded in 2005, and the plan was developed fully in 2007.

The service area was built by North Midland Building Ltd on the instruction of Moto, and it claimed to be the most environmentally-friendly service station around, with features including a large funnel to act as air conditioning and a giant 'wing' for a canopy. Wetherby has quickly become one of Moto's busiest and most profitable services, benefiting from the lack of facilities on the new A1(M).

The petrol station opened on 5 July 2008, with the rest of the service area opening on 23 August.

It has a 126-bedroom hotel (the first to be built at a Moto which wasn't a Travelodge), this was originally going to have three-storeys but that plan was rejected for being unsightly. The current hotel is operated by Starboard Hotelswebsite and was opened in Spring 2009, with a largely glass frontage rarely seen at a motorway hotel.

There are 67 HGV spaces, 20 coach spaces, 395 car parking spaces and a 309-space overflow car park. The car park is tight and narrow, which would go on to cause numerous issues and require staff to help cars use it. By 2013 all the parking areas had been expanded, and a new exit from the car park had been built.

In 2012 a KFC was planned to be added here, but it was postponed and opened in July 2019. In the intervening time a Greggs was built outside, and another was added to the filling station in February 2019.