Signposted from the road? As Greggs/Costa/M&S

More of a courtyard than a service area, and technically only a truckstop but it caters for cars too. It's located at the M6/M56 interchange and used to have an independent appeal; it's now considered to be in-line with other Moto services.

Prices are paid using pay points in the main building. The fees are strictly enforced by CP Plus. 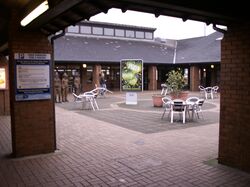 In August 2000, Granada reached a formal agreement with the Highways Agency to encourage lorries which had been stopping at Knutsford to use Lymm instead. Knutsford only has 27 spaces for lorries whereas Lymm has 600.

The Greggs outlet was the first to open at any British service station.

There are a series of breakdown units located within the services.

The complicated road layout here means stopping here while driving west along the M56 will add more than two miles to your journey. In practice most of that detour is on a motorway, so not as bad as it sounds.

There was a truckstop to the north of Cliff Lane, dating back to the 1950s, known as Poplars Truckstop. It was taken over by new owners in 1983 who found a number of issues including that it was too small, and its tight entrance was frequently causing queues on the A50.

In 1987 the new owners proposed moving the truckstop to its present site, south of Cliff Lane. The move was approved despite opposition from the A50 Pressure Group.

The new truckstop was branded Poplar 2000 and opened with 480 parking spaces. McDonald's joined it in 1995, on land they lease from the service area. A Travelodge was built in around 1997.

Lymm had a conference room on the north side, café on the east side, toilets on the south side and a shop on the west side. An advert from its opening described a 32 acre site with facilities including four restaurants and a cinema.

The site was acquired by Compass Group. When Compass merged with Granada, Poplar 2000 was placed in the Compass Roadside division, which meant when the two were split it came to be owned by Moto. Moto continued to use the Poplar 2000 name, but began introducing some of their partners too.

As early as May 2001, Moto looked at adding a Scoop and Ladbrokes to the main building, as well as a larger restaurant. This didn't happen, but other partners such as Costa and WHSmith were introduced, replacing the old Poplar-branded facilities. The entry barriers stopped being used, which increased car traffic but led to an increase in crime.

There had been reports that Moto were going to keep the Poplar name and apply it to Barton Park, but by the 2010s it could only be found on road signs, and by 2015 it had been totally removed.

Even so, Moto wanted to invest in this site. An M&S Simply Food opened here on 19 March 2015. Lucky Coin and Fifth Wheel Bar & Grill also officially opened here on 25 March. A temporary unbranded restaurant and bar had been in operation whilst the new facilities were built.

The Travelodge motel closed in late 2013 and was sold on to Ibis Budget who reopened the hotel in May 2014.