Two sites located between junctions, with no public connection between them.

Heston has gone the full circle: one of the oldest services in the country, totally rebuilt with barely any evidence of that left, and now it's starting to look old again. It's also one of the only motorway services in London. 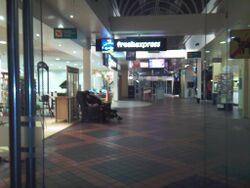 The westbound corridor in 2008.

Several sources are adamant that TV-chef Heston Blumenthal was named after his parents' love of the services, although he claims this isn't true.

It was located amongst what was one of the most controversial road features in the country: the M4 bus lane.

The services sprouted from a planned maintenance compound, with several positions investigated. Full history of Heston.

Greggs opened in the eastbound forecourt on 30 March 2017. In June 2020, Moto finally opened a store within the eastbound main amenity building which was due to open during the period of the COVID-19 lockdown.

In Spring 2017, Transport Focus calculated a 90% satisfaction score for the westbound services and 62% for the eastbound services. This meant the eastbound side had the worst score of all 112 English services surveyed, although Moto blamed this on refurbishment work. In 2018 the two scores were 87% and 88%; by 2019 Heston West scored 99%, making it the second-best in the country.

In January 2021, Moto were granted planning permission to install 16 electric vehicle charging bays to the north of the main car park on the westbound side. These bays will include 6 Ecotricity charging points and 10 Tesla Superchargers.

It features briefly in the 2007 film 'Hot Fuzz' and was referenced in 'Gavin and Stacey', where Nessa says that she'll be "Stopping off at Heston's" and Bryn says that he "doesn't want to stop before Heston". The references returned in 2019 revival, where the characters all complained about it. True pedants would notice that their journey from Essex to Wales would never pass Heston.

After a short spell out of the limelight, Heston made a short appearance in 'The Grand Tour'. It wasn't named, but was visible on signposts.