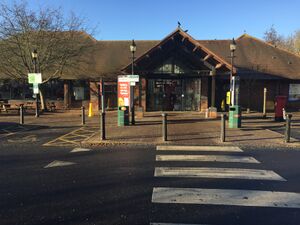 42 more photos in the gallery

M20 at J8
(also accessible to traffic on the A20, but via a short section of motorway)

Maidstone is a fairly spacious service station on the M20, although it has few lorry spaces.

Due to more Brexit preparation works, the exit from Maidstone services to the M20 coastbound is currently closed. Traffic leaving the services towards Dover need to head back towards London and then turn around; a 6 mile journey.

Prices are paid using PayByPhone - more details or in the shop. The location code is 5256. 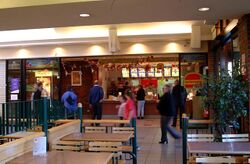 42 more photos in the gallery

For some time, Maidstone was the only service area on the M20. The entrance to the service area crosses the Channel Tunnel Rail Link, which was constructed around the same time.

The service area is encompassed by Operation Brock. When there are delays at the Channel Ports, the J8 eastbound on-slip is closed, which means traffic heading towards the coast can leave at Maidstone services, but it cannot rejoin. To rejoin, traffic needs to head back to J7 and turn around, which is a significant detour. This new traffic system was trialled in March 2019, used again in October 2019, then tested again in December 2020, after which it was removed, before being reintroduced a few days later to deal with the COVID fallout.

As far back as 1962, there were plans for a large service area at Detling, near M20 J7. This was going to be the M20's main service station.

In 1974 attention turned towards Silverhill (later known as Hollingbourne), which Kent County Council preferred because it would be positioned at a junction, and therefore less environmentally damaging.

Throughout the 1980s, with plans still ongoing, Esso raised an interest in the land. They proposed three different possible layouts all positioned at M20 J8 (known to them as Woodcut Farm).

In June 1986 the Department of Transport confirmed their "M20 policy", which stated that they would be building a service area at Hollingbourne, and developers would be invited to bid for it. A public inquiry took place in 1988 where Esso's three proposals, as well as their objection to the Department of Transport leading the scheme, were all thrown out. The inspector considered building at Allington Quarry at M20 J5, but concluded it would be too expensive to build.

With the Department of Transport looking to save time and money, having won the case, they later decided to award the contract directly to Esso under a new private initiative scheme, on the basis that Esso had demonstrated an interest in the land.

The design work for Hollingbourne (eventually opened as "Maidstone services") was all completed in Esso's name. They chose to partner with Roadchef to operate most of the site. Esso continued to run the petrol station, until they sold it to MRH, now MFG.

The main building took a typical 'corridor' layout, with a dedicated restaurant area (seating 280) along the south side.

In 2015, a significant extension was planned. This would have added a Spar to the front of the building, and changed the layout to have the passageway snake through the middle of the dining area.

In June 2018, the services set up a trial Costa machine which offers 5p vouchers in return for coffee cups and plastic bottles, as part of an initiative to reduce litter in the area.

In autumn 2019, MFG refurbished the forecourt. This included a rebrand of the shop to Londis, the addition of the West Cornwall Pasty Company cabinet and the installation of four IONITY charging points.