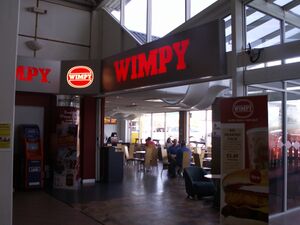 Traditional burger chain Wimpy were the very first High Street name to make it onto the motorway, following a partnership with Top Rank in 1964. Sometimes known as Wimpy Express, these stand-alone takeaway units took the pressure off the main restaurants by selling hamburgers and ice cream, and were usually popular.

More recently, in 1996 Roadchef trialled a Wimpy restaurant inside Durham services. Shortly afterwards they decided to roll out Wimpy to all of their services in preference to newer rivals McDonald's, with Wimpy commenting "the little guy can sometimes win". Wimpy didn't quite make it to every site, as the smallest three were excluded.

Officially these units were known as 'Wimpy Express', but that brand was rarely used on the ground. Wimpy was generally intended to be a takeaway offer but the motorway branches usually included a small choice of seating. At Harthill, a combined drive thru and sit-down restaurant was built, and Roadchef had looked at building more of these.

Wimpy enjoyed 10 years as one of Roadchef's main brands, and for many motorists the roadside was probably the place they saw Wimpy most often.

Following a new franchise agreement in 2007, Roadchef started to replace Wimpy with McDonald's. They were slow to roll out the successful trial, and in the interim period many Wimpys temporarily became The Burger Company.

In Ireland, Applegreen acquired the master franchise for Wimpy in the early 2000s, and introduced a Wimpy restaurant to many of their service areas. The deal ended in 2010, after Applegreen secured a deal with Burger King.

Despite a common myth that Wimpy is defunct, the chain is in fact alive and well, with a number of franchised branches on high streets across the country. None of these are on major roads.

At least 13 services gained a sister company to Wimpy, only serving chicken dishes, named Dr Beak's Chicken. In 2003, Wimpy merged this with their own name to create Wimpy Chicken. This lasted at services until 2007.

Wimpy used to be found at the following services: