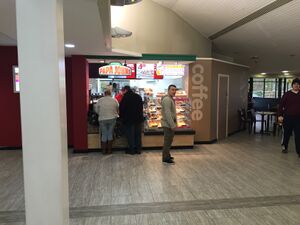 In July 2014 a cabinet was provided at Oxford, which is comparable to the cabinets more commonly seen from Krispy Kreme.

In March 2015, two outlets opened at Corley southbound and at Leicester Forest East, where the doughnuts were sold from the same counter as the existing Papa John's Pizza branches.

All of Welcome Break's Dunkin' Donuts outlets were closed permanently in January 2017.

Dunkin' Donuts cabinets were later introduced to some Gleaner filling stations in Scotland in 2020.

Dunkin' Donuts have recently been introduced at some Gleaner filling stations. They are:

Dunkin' Donuts used to be found at the following services: