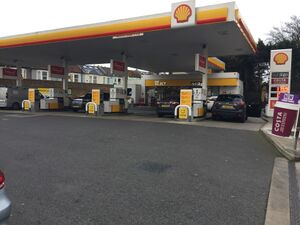 A long relationship with Forte has given Shell a strong presence on A-roads and, until recently, motorways.

This stemmed from them being the forecourt brand used by Welcome Break at sites they managed, but since Welcome Break were taken over by forecourt rivals Applegreen in 2018, Shell's branding has been slowly removed.

Shell continue to lease the forecourts at some Roadchef and Extra sites. On A-roads, they can be found at many former Forte sites (most of which were previously known for their Little Chef restaurants), as well as former Total forecourts.

In 1966 Shell had taken an interest in operating what eventually became Burton-in-Kendal and Tebay services entirely on their own. In 1995, they developed Chester.

See also: Shell as a Leaseholder

Shell used to operate across the Republic of Ireland, but these forecourts were sold to Topaz following the controversy surrounding their involvement to and response to the Corrib gas controversy and Rossport protests.

Shell operate at some Welcome Break, Roadchef and Extra services. They are: [view on a map -  Download KMLrefine search]

Shell can be found at many A-road services:

Shell no longer operates at the following services: