A small atrium building forms the M54's only motorway service area, acting as a pit stop on the route to Shrewsbury and Mid Wales.

Prices can be paid in the shop, with instructions in each car park. They are strictly enforced by ParkingEye. 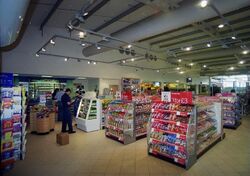 While the M54 was being planned, the intention was that there would be a service area at Lizard Hill. This was always going to be a low priority, and when the M54 opened in 1983 it wasn't included.

In 1985 Lord Stafford registered a plan to build a motorway service area at Castle Farm. This was followed by one from Shell and then the Department of Transport. Tradition was that the Department of Transport would dictate where new motorway service areas would be built, but they were increasingly likely to take inspiration from private developers.

A press release from 1986 stated that the Department of Transport were merely "investigating options" for the M54, without naming any locations. It would soon become clear that Castle Farm was their preferred site.

The Department of Transport ended their involvement in new service area planning in 1992. With no progress having been made at Telford, the door was open to any developer to come in. Lord Stafford and Lanmead Limited made the planning application in 1993. British Land Plc and Hallam Land Management were later involved.

In 2002, Henry Boot Developments (a subsidiary of Hallam Land Management) leased the land to Welcome Break on a 25 year lease. In 2006 the land was sold to Rockspring Property Investment Managers for £13.2m.

The original plan had the hotel, amenity building and forecourt sales shop all in one building, arranged in an L-shape with the main part in the corner. This was rearranged before it was built. It now has a small building, anticipating low traffic levels, and may have only opened to keep competitors away. The corridor to the toilets is especially narrow.

In addition to the coffee stand by the entrance, two units were provided: initially these were Burger King and a large restaurant counter. Next to these was a third counter, used to purchase fuel and items from Welcome Break's own-branded shop. In line with all other Welcome Breaks, the shop was later branded WHSmith, but it was still selling fuel and stock which was displayed all over the back of the building.

By now traffic levels had increased considerably, causing Welcome Break to remark that they wished it was a lot larger. A lot of items representing the history of Telford were positioned around the car park, but many of these were removed in 2010 when the car park was extended.

The restaurant was eventually removed and became a large Waitrose. In May 2018, the WHSmith sign was taken down from sales counter and instead an un-branded 'please pay here' was used, alongside the Shell logo. This change made space for the introduction of The Pasty Shop, an Upper Crust brand.