The third and final of Ireland's long-delayed Tranche 2 service stations is now open. As might be expected, it can be very quiet, but still fills an important gap in the network. 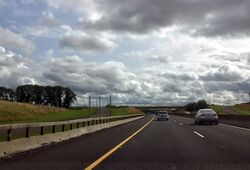 As part of Ireland's desire for new motorway service areas which was only discovered in 2007, a site was planned at Kilcullen. A new junction was built to accommodate it in 2015 but the site didn't open for another four years.

Topaz won the contract to operate Kilcullen as their offer scored 7% better than SuperStop's (Applegreen). SuperStop argued that this fell down to a difference in how the footpaths should be surfaced which hadn't been accounted for, and their objection prevented work from progressing any further

After clearing all the legal hurdles, it was set to open in June 2019, but was then pushed back to 23 October 2019. An official opening celebration was held on 25 October.

The service area opened with Petite Camile in place of Circle K's Cantina. Petite Camile is a partnership between Camile Thai and Circle K, which they intend to roll out to more sites.