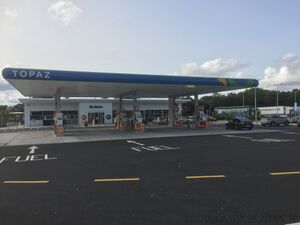 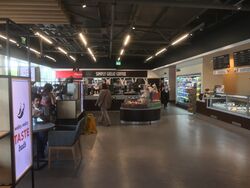 In 2013, Topaz applied for planning permission for a new service area on the M9, and received it - despite objections from the National Roads Authority who were already planning services at Kilcullen.

In February 2017, it was finally confirmed Topaz were acting on the plans, working in partnership with McDonald's in an €8m investment.

The services opened on 28 April 2017 with a family fun day, joined by footballer Brendan Murphy. It was branded Topaz's flagship site, offering Mexican street-food concept Cantina and the first use of Circle K's fuel brand, Miles.

The press have referred to the service area as Rathcrogue. As a parody of the popular Barack Obama Plaza, some people have nicknamed these services 'the Donald Trump Plaza'.