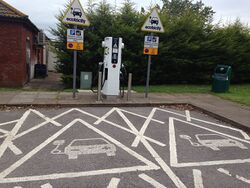 On the UK motorway network, they are almost all provided by Ecotricity, as part of what they called "the electric highway". These charging points were mostly installed in 2007, and while they may have been refurbished since, some customers argue that they are unreliable and have not kept up with developments in the industry. In other words while Ecotricity's initial investment was welcomed at the time, there is now some concern about the logic of one company operating at every motorway service area.

Like most chargers, Ecotricity are automatically informed when a charger is not working ("offline"), and are then expected to repair them as soon as possible.

Meanwhile, many services have been fitted with large Tesla Supercharger charging points. Little Chef were early adaptors adding about 80 charging points to the national road network, and their successors Euro Garages continue to add more. Shell and BP have also been developing their own range of charging points, to be fitted nationwide, between them creating a reasonably large network. IONITY recently signed an agreement with Extra.

In Ireland, ESB ecars is the main provider, with IONITY joining them.

Our search engine includes the option to search for only services with a charging point.

The official electric car symbol that is supposed to be used on road signs in Britain.

The symbol that is used in Ireland.

The UK service area regulations contained no reference to charging points until 2013, even though operators had been fitting them since before the previous regulations were written. Despite this, the 2013 update merely said that it encouraged operators to provide recharging facilities and alternative fuel technologies.

At the same time the regulations were updated to acknowledge that there is an official symbol for electric vehicle charging points, and to advise that this can be used on motorway signs to advertise the facility. In most cases, it is substituted for another food brand.

In 2017, to much government fanfare, providing an electric vehicle charging point finally came mandatory for motorway services - even though they all already had one.

At the start of 2020, Roadchef, Welcome Break and BP were all quoted criticising the UK's electricity infrastructure, which they said was hindering their roll-out of charging facilities.

In December 2020, Gridserve at Braintree was dubbed Britain's first "electric forecourt". It is effectively a normal major road service area, but with various types of electric charger instead of fuel pumps. With Gridserve planning more sites, this is likely to encourage operators to step up a gear. For example at Colne Valley, Welcome Break have already committed to building 100 charging points (brand not known), way above the dozen-or-so that they usually provide.

Gridserve then purchased a stake of Ecotricity in March 2021, and promised to upgrade all of their motorway charging points.

In March 2021, Transport Minister Rachel Maclean told Electrifying.com that the British government would be spending nearly £1 billion on improving the electric vehicle chargers on main roads. She said every motorway service area would have at least six rapid chargers by 2023, and that there would be 6,000 chargers across the major road network by 2030. These would be available to all road users with a contactless payment card, and the companies provided them would be contractually bound to provide a service that works at least 99% of the time, and to provide a 24 hour customer support line.

Although it wasn't stated explicitly, most electric vehicle drivers have interpreted this as being an end to Ecotricity's dominance of the motorway network. The minister's comments also suggested that the government's policy of allowing the private sector to decide what's needed hadn't worked, and that they now believe they have to intervene.