23 more photos in the gallery

Now a shadow of its former self, Musselburgh is the only official service area on the Scottish side of the A1 but it doesn't have a lot to show for it.

It is now similar to Markfield in that it had a lot of facilities which are now redundant. 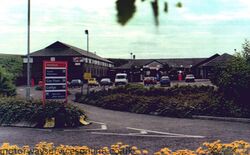 23 more photos in the gallery

It was built by Granada in 1989 to coincide with the completion of the Edinburgh City Bypass and the A1 Musselburgh Bypass. It had a Granada Shop, and Country Kitchen Restaurant, as well as a Granada Lodge.

The restaurant became Scotland's only AJ's in 1992. The shop became a Burger King, and then the AJ's changed to a Little Chef by Granada in 1996.

In 2001 there were plans for the Burger King to gain a drive thru, but these were dropped. There were also plans for an extension to the Travelodge building utilising some of what is now the HGV parking area. This plan was accepted in 2005 but was never built.

Like Colsterworth services, most of Musselburgh was sold off by Moto in 2002 along with the Little Chef brand, although for a while they operated the restaurant remotely by franchise arrangement.

The Little Chef here closed in 2010, leaving the main amenity building completely devoid of any facilities.

The Travelodge was previously also operated by Moto, but Travelodge themselves would eventually take it over. In October 2013, MRH took over operation of the filling station and the brand changed from Esso to BP. It is now operated by MFG following the merger of the two companies.

The service area is still signed from the A1 and A720, but the symbols advertise just a hotel and petrol station.

In 2020, MFG submitted plans to demolish to former amenity building and build a new Starbucks Drive Thru. The Starbucks Drive Thru will be positioned on the current car park with the current car park entrance being blocked off directing traffic to enter the new car park which will be positioned on the site of the former amenity building.

The plans also include the installation of 4 electric vehicle charging bays situated in the Starbucks car park and also a new hotel entrance due to the need to detach the current Travelodge entrance from the current amenity building upon demolition. A decision is yet to be made.

In early 2021, Travelodge decided to part with the site and closed the hotel. The hotel was boarded up and now leaves the filling station as the only facility left trading at the service area with a very large, empty building in the middle.