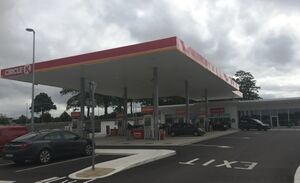 2 more photos in the gallery

Circle K came to Ireland with their brand new forecourt at the Fermoy exit on the M8. 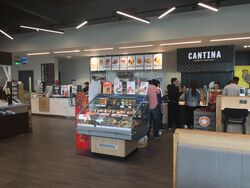 2 more photos in the gallery

JR Oronco Ltd held planning permission to build this service area at M8 J14, Moorepark. They billed it as "the largest development of its kind in Ireland". Meanwhile, Applegreen had their service area planned for M8 J13 approved initially, but this was then refused over concerns about the impact on the environment and economy.

In February 2016 it was announced that JR Oronco's Moorepark site would be built by Topaz and McDonald's. Work started on the construction in August 2017 and involved the construction of a new roundabout on the R639. The McDonald's drive thru was then refused planning permission on the grounds that it would take trade from local towns. Although the developer appealed this, it meant the site opened as a more standard forecourt with a large car park.

The service area opened on 30 March 2018 as the first site in Ireland to acknowledge Topaz's new name, Circle K, as their 'Fermoy' site. It is one of few forecourts to offer 'pay at pump' facility. The McDonald's drive thru finally received planning permission in December 2020.

Although Transport Infrastructure Ireland consider Fermoy to be an official service area, the signage they provided on the M8 was somewhat limited. It then has to compete with another signposted 'service station' (a standard petrol station) on the other side of the same interchange.