A rest area is like a motorway service area, only it doesn't need to provide fuel or food. This page is about the UK, but in Ireland a similar concept is referred to as Type 2 Service Areas.

Motorway rest areas remain very rare in the UK. Developers have shown no interest in the concept, and the only open rest areas are all historical quirks:

Motorway service areas in Britain are normally large developments, but there have been many attempts to build something much smaller. 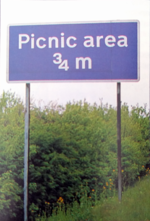 In 1965, when the M6 was built through Cumberland and Westmorland, the local authorities suggested motorists might like to take advantage of the good views here by using parking areas provided every six miles. The Ministry of Transport preferred the idea of building services every 12 miles, not wanting the motorway network to be filled with leisure drivers. They also looked at building car parks at every motorway junction.

Similar arguments had been made for the M50 through Worcestershire, although that was before motorway services had been finalised as a concept. In the event, none of these ideas were taken forward.

In 1973, one government parliamentary secretary was impressed by French motorway picnic areas, and suggested the UK did the same. Newland Common was going to be the first candidate, but Brent Knoll was built instead. Maintenance problems and commercial demand caused it to be sold to different operators. The whole experience was later summarised as "unfavourable". Although it was known as Brent Knoll rest area, the road signs made it clear it was a "picnic area".

At Hapsford, no developer was interested in the site so in 1978 it opened as a council-run picnic area. This lasted until 1998, when a commercial operator expanded it.

The final motorway example dates back to the opening of the M40. Problems planning the services caused the road to open with 'emergency facilities'; temporary facilities provided at junctions, taken away when the full services were ready.

On the A-road network, roadside facilities have always been provided and signed inconsistently. Cartgate, for example, is signed as a "picnic area" on white signs while Great Dunmow (opened in 2004) is signed as a "rest area" on brown (tourist attraction) signs. One 1974 document revealed the government wanted to invest in A-road rest areas, but they didn't have the money for it. Highways England's policy does not recognise A-road rest areas as a class of facility, even though they own several of them. 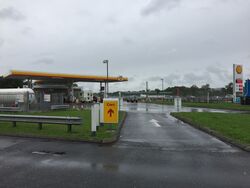 The two petrol stations are the main facility at Todhills rest area.

In 2008 the A74 at Todhills was being upgraded to become a motorway. Strictly speaking, the small service area at Todhills should have closed, as it had limited facilities and there were existing alternatives nearby. Closing it would have meant an expensive compensation process and breaching assurances which had previously been given to the landowner.

At the same time (and the timing was almost-certainly no coincidence), the Department for Transport held a review of their policy on roadside facilities. This brought up the subject of rest areas and suggested they could be used to give drivers more places to stop. The idea was approved and 'motorway rest area' became an official status for smaller facilities that want to add to the existing offer - just in time for Todhills to become one.

In 2010, the Highways Agency published a list of the gaps between all the existing motorway facilities and compared them to the criteria set out in Circular 01/2008, in the hope that this would encourage more developers to come forward. In 2013, they relaxed their regulations which meant having too many alternatives would no longer be a reason to stop new service area.

Todhills remained the country's only rest area until Leeming Bar joined it in 2014, soon followed by Scotch Corner. Both are survivors of the A1 which had been upgraded to a motorway, even though the former is a long distance from the nearest motorway junction and isn't clearly signed.

Strictly speaking, Scotch Corner doesn't meet the standards required of a rest area as it doesn't have HGV parking, but understandably a decision was made to let this slide and simply warn HGVs that they couldn't stop there. Other than this, all three of the UK's motorway rest areas offer significant facilities; enough to qualify as a full motorway service area and more than some other motorway services do. Rest area status therefore appears to being used with no apparent logic, and 10 years later nobody has proposed any new motorway rest areas to build from scratch.

There was a plan to upgrade part of the A14 to motorway, which included two services: Cambridge and Brampton Hut. With construction well underway, there was no word about whether these two would continue the trend of randomly being designated rest area rather than motorway service area. Shortly before the road opened, the road was downgraded to standard A-road, so the question has become academic and was probably never even considered.

As set out in Circular 02/2013, rest areas must provide at least the following facilities, 24 hours a day, every day of the year, while complying with all current and future equality legislation:

The number of parking spaces and toilets required is calculated using the same formula as that for rest areas, except the figures should be halved, and rounded upwards if appropriate. 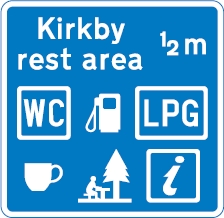 The signing for a rest area is the same as that of a motorway service area, only with "services" substituted for "rest area". The only other differences are that the ½ mile sign may not contain an operator's headboard, and that they may not be signed from a distance greater than a mile. The brand names permitted since 2012 are not allowed.

As of 2016 the rest area signs are now included in the Traffic Signs Regulations and General Directions. Until then, special authorisation was required.