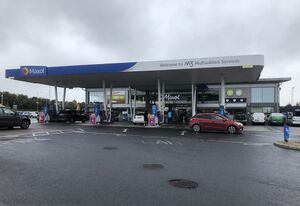 6 more photos in the gallery

N3 eastbound between exits 4 and 3

A new development on the N3 heading into Dublin; it is effectively a petrol station with parking and a very large sales area, including a number of eateries. They are not signposted from the road but there is some 'Supermac's' signage.

Free customer parking is available. Further information is not available, please update this if you know.

6 more photos in the gallery

This service area was a slightly speculative development. The N3 was proposed to be upgraded to the M3, and the development assumed it will become a full motorway service area on the new road. The building is officially branded M3 Mulhuddart Services. Initially Maxol and Mace branding was mainly used, but from 2019 the M3 Muhuddart name was pushed further instead.

It is currently located off a small, unnumbered side-turning on the eastbound (inbound) carriageway of the N3 at Parslickstown Junction. The N3 upgrade now looks unlikely to happen, but most customers won't notice the difference.

The building was built on greenfield land on the edge of Damastown in 2016. It opened with units branded Chopped, Insomnia, Moreish and Supermac's, a shop branded Mace and fuel branded Maxol. The Moreish became Maxol Deli and Mace became an un-branded store in 2019.

Although the shops and restaurants close at night, a paypoint for the fuel and a separate toilet block remain available.

The service area is part of The Lidon Group, who also own Junction 14 Mayfield. It has its own slogan: at the heart of great food.