The vast majority of service areas in the UK feature a hotel - sometimes called a motel or lodge. They are often very profitable, and a major operation for the motorway service area operators.

At motorway services, the hotels are operated by the service area operator, franchised under the Travelodge, Days Inn or Ramada names.

Most roadside hotels are able to operate a policy of ensuring they are fully booked every night, relying on online bookings and managing their prices depending on local events. They usually offer flexible check-in arrangements, but few facilities. Customers are expected to either use the fast food options next door or drive to somewhere else to eat.

In 1958 'Motorinns' proposed a chain of motorway hotels. They were rejected, but similar designs were built.

The UK took much of its motoring inspiration from America, with the motel being an obvious example. American motels ('motorists' hotel') tended to be a very cheap and cheerful affair, with small buildings located next to major roads in rural areas. They would be used mostly by travelling businessmen.

By the 1960s, some American-style motels were opening in the UK, such as the The Forth Bridges Motel. Forte were the first major chain to get on board, but they preferred the phrase 'Motor Lodge', in an effort to appear more upmarket than the sleazy American motels. They tended to avoid the word "hotel", which was a little too grand, but these hotels were clearly designed to appeal to the few who could afford to drive.

France was the first country in Europe to develop true budget accommodation. Throughout the 1980s, the English Tourist Board and media championed the French system, and wanted to see it used in Britain. This happened in 1985 when Forte relaunched the Little Chef Lodge brand, to create something that was cheap to run and easy to expand, starting with the hotel at Barton-under-Needwood.

At the time Little Chef was aimed mainly at businessmen, and the availability of a cheap overnight halt next door would increase the late night and early morning trade. Attaching it to an existing restaurant kept costs down, for example by sharing a car park.

Forte soon converted all the Little Chef Lodges to their American brand Travelodge. Other operators were quick to copy the format: Granada created Granada Lodge, which became a common sight on major roads, and Whitbread created Travel Inn, and turned it into the biggest budget hotel chain in the country.

While those familiar with American culture may have called these 'motels', both brands would insist that the correct term was 'lodge'.

The Charnock Richard motel was built next door to the motorway services.

The Department of Transport were less convinced. They owned the land that most motorway service areas were built on, and were very sensitive to the idea that the land might be used for anything other than what was first envisaged. Their position was that hotels weren't needed, and that if there was any money or space for investment then it should be used to tackle the existing problems with the service areas.

Forte had a trick for that. At several services, they bought land next to a motorway service area, and operated it as a motorway hotel without needing to consult the Department for Transport or obey any of their regulations. At Sandbach, there were rumours that a sister hotel was going to be built half a mile down the road.

Accepting that they weren't going to win, in 1979 the Department of Transport reluctantly started to allow lodges to be built at motorway services on spare land that wouldn't be needed. Lodges started to be included in all new proposals, usually under a separate planning application. Initially they were always built with a dedicated car park, but this requirement was later dropped.

The recession of the early 1990s further increased the demand for budget accommodation, as businessmen looked to reduce their costs.

In 1994, the regulations stated that "overnight lodges" were permitted but "full-scale hotels" were not, prohibiting bars, restaurants, function rooms or large meeting rooms. The fear was that motorways would be compromised by traffic making detours to all these hotels. The current regulations are much more relaxed, permitting all hotels subject to the usual planning process.

Convention appears to be that where a lodge is provided on one side of the motorway only, lodge guests can use the rear access to drive across the bridge, rather than having to turn around at the next junction. Such directions were usually poorly-signed, and caused confusion about who could use the rear access.

In 2008 the regulations were updated to state that new hotels can only market themselves at the side of the road where they are positioned, implicitly encouraging services to build one hotel on either side of the road. The current regulations don't mention the subject. 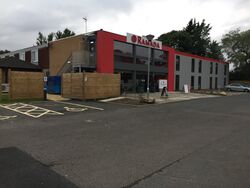 The new front attached to the old Charnock Richard motel.

By the 2000s, roadside lodges had become a huge business. They were often positioned in convenient places and were now being used by families on days outs. Branch names were changed from obscure villages to those of nearby towns. Many motels were frequently full so were able to start raising their prices, but to do so they had to improve their image too.

Travelodge worked hard on improving their furnishings to shake off the sleazy hotel image. But the evolution can be seen best at Welcome Break, where Welcome Lodge became Days Inn and then Ramada. The upgraded buildings have new fixtures, glass frontages and an on-site bar. Unsurprisingly the early candidates for conversion were the large hotel at London Gateway, and the two hotels built next to Stansted Airport at Birchanger Green.

Perhaps the biggest catalyst for change was the internet. Before the internet, all motels had to market themselves was their signage next to the road and brochures they would hand to their customers. With online search engines, hotels on the outskirts of cities would be advertised alongside those in the city centre, so to ensure a full booking all the 'motel' had to do was charge slightly less than the major city centre hotels.

By now Travelodge were starting to close some of their quieter motels, focusing instead on branches competing in busy city centres. There are still many cheap roadside lodges, but most (especially the big brand names) ensure they are fully booked every night.

As A-road services tend to consist of several different operators, they are easier for new chains to get a foot in. Some A-road services positioned near large towns have attracted more lavish names.