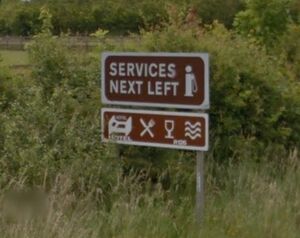 Only one photo tagged with Swords. If you have one, why not upload it?

Swords services was signposted from the M1 southbound until 2016. However, once you get to the exit, the signs disappeared and no services are to be found. The nearest forecourt is almost 1km up the road.

It's understandable that some signs may have been put up in the era where the M1 had no services even if such signs weren't strictly allowed, but now the M1 has formal services and large unofficial ones it's odd that these signs should remain.

It is a mystery as to where the services referred to actually are. Ghost services can also be found further up the N1 at Ravensdale.