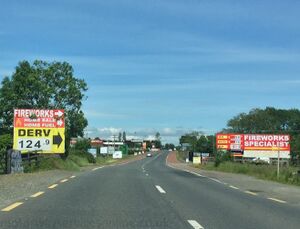 Series of sites arranged around a junction.

This isn't a single service area as we would recognise it, but a series of facilities located on the original Dublin to Belfast road as it crosses the border at Killeen. Traffic is able to leave the new A1 north of the border, take the old road past the services, and then rejoin the road to the south (or vice-versa).

The biggest of the many petrol stations.

The facilities on either side of the border at Killeen are there to take advantage of the different currencies and regulations. This includes a number of forecourts, which is why the exit is signposted as "Dublin Road services".

Signage outside Barnaby's (immediately north of the border) appears to call that one the official service station, although it's not clear if that was meant to imply that all the others are of a lesser status. Given the nature of the road, there is probably no single 'official' service area.

These facilities were originally on the main road to Belfast, but they saw a drop in trade after the new cross-border dual carriageway opened in 2006. Consequently many of them are looking tired, as the road no longer attracts investment from many of the big names.

The various facilities along Dublin Road united in August 2019 to form the 'Dublin Road Services Operators Group', which wanted to fight plans for a new Maxol forecourt that was planned to be built north of Newry. The group stated that the whole length of Dublin Road had been designated as one service area.

Curiously, due to the position of the border, northbound traffic briefly spends a few hundred yards in Northern Ireland before re-entering the Republic and then entering Northern Ireland again. For many years this area was politically contentious, and more recently there had been a number of concerns regarding Brexit, but at the moment there seems to be no issues here.

Morgan Fuels received planning permission to rebuild their forecourt in November 2020. They intended to add a restaurant and a convenience store.