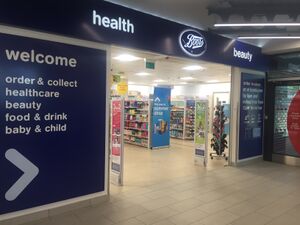 Only one photo tagged with Boots at services. If you have one, why not upload it?
Website:
www.boots.com

In 1998, Boots The Chemist announced that following a successful introduction to out-of-town retail parks, they wanted to trial opening shops at airports and motorway services.

This coincided with Granada's plans to make their services profitable by turning them into large retail destinations. As a result, an agreement was made between the two.

At the time, Boots owned Halfords, who also had an agreement with Granada. Boots is now owned by the expanding American pharmaceutical chain Walgreens.

When Granada became Moto, focus moved away from having lots of individual shops, so the motorway stores weren't rolled out any further and eventually closed. Sales were later described as "disappointing". Boots continued to operate a travel-store sector with appearances at many airports and large train stations.

In 2018, Roadchef revealed plans to bring Boots back to the motorway, starting with Strensham. The trial store at Strensham opened on the southbound side in Spring 2018. However, following an unsuccessful trial, the Strensham store closed in late January 2020.

Boots used to be found at: